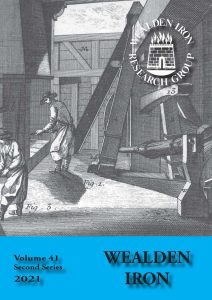 WIRG Newsletter
WIRG publishes a twice-yearly Newsletter for its members.

BOOKS ABOUT THE IRON INDUSTRY AND ITS PRODUCTS 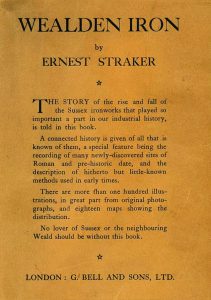 From the sleeve notes: Wealden Iron deals with the former Ironworks in the counties of Kent, Surrey and Sussex. It relates the history of this industry from its early beginnings to its complete and very definite end towards the close of the 18th century. The book also includes a survey, made by the author, of the existing remains of the ironworkings.
The story of this industry has, however, far greater significance than a mere study in local archaeology. Its history is very clear cut and self contained, yet it throws considerable light on the industrial and economic life of the country as a whole over a period of more than 300 years. This book is now OUT OF PRINT. However, you can download a searchable pdf of the book (116.3Mb) NB: note the file size
NB: The Contents list on page x has hyperlinks to the beginning of each chapter to facilitate reading a particular section of the book. There are also hyperlinks on page xi to each of the sections of the gazetteer and to the pages of maps. 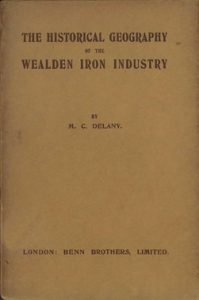 The Historical Geography of the Wealden Iron Industry by Mary Cecilia Delany (1921)
This short study was published as the first in a series of research monographs by the Geographical Association. In a  contemporary review, M. S. Giuseppi wrote, “Miss Delany has well kept the first object of the series and her own title in view by devoting the greater part of this little book to a consideration of the geographical and other natural features of the Weald which made possible the continuance of its iron industry over so long a period.” The author drew extensively from previously published sources and it is apparent that she did not carry out any original research in its preparation. Instead, it was  intended as a guide for future research.
The book is OUT OF PRINT but copies are available on the second-hand market and a digitised copy is available for on-line study or download here. 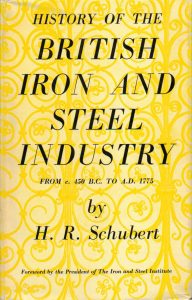 History of the British Iron and Steel Industry by H. R. Schubert (1957)
Although dated, this is probably still the best general survey of the industry as a whole, and includes much of the early research into the Weald by Straker and others. It divides the industry into its two basic iron-making methods: the direct and indirect processes. Within those two sections it covers the history and the technology, drawing on continental as well as native examples, and there are several appendices which include useful sources, such as inventories and production statistics.
The book is OUT OF PRINT but copies are available on the second-hand market and a digitised copy is available for on-line study or download here.

The Wealden Iron Industry b 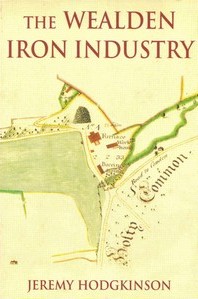 y Jeremy Hodgkinson (2008)
From the cover notes: For two periods of British history – the first part of the Roman occupation and the Tudor and early Stuart periods – the Weald of south-east England was the most productive iron-producing region in the country. Looking across the tranquil Wealden countryside, it is hard to identify anything that hints at its industrial past. Yet 400 years ago, nearly 100 furnaces and forges roared and hammered there, the smoke from charcoal-making curling up from the surrounding woods and the roads bustling with wagons laden with ore and iron sows. Many British naval campaigns, including the Spanish Armada, the wars against the Dutch, and the Seven Years’ War, relied on Wealden iron cannon, the pressures of conflict driving forward the development of iron-producing technology. For a time the economy of the whole area was dominated by the production of iron and its raw materials, providing employment, generating prosperity, and shaping the landscape irrevocably. Drawing on a wealth of local evidence, this book explores the archaeology and history of an area whose iron industry was of international importance.
Available from The History Press ISBN 9 780752 445731 – Price £15.99 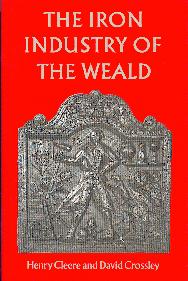 The Iron Industry of the Weald by Henry Cleere and David Crossley (2nd ed. 1995)
From the sleeve notes: The Weald of Kent, Surrey and Sussex form the site of the major concentration of ironmaking in Britain during two distinct periods of the island’s history; during the Roman occupation of AD43-400 and in the 16th and 17th centuries. This book surveys the evidence derived from excavation, fieldwork, documentary studies and experimental archæology carried out by the Wealden Iron Research Group. It includes chapters on geology and topography of the region, the iron industry during the successive periods of operation, and the technology of the direct and indirect ironmaking processes, together with a detailed gazeteer of sites.
This book is now OUT OF PRINT but all good libraries should have a copy. However, you can download a searchable pdf of the book (26.5Mb). NB: The Contents list on page v has hyperlinks to the beginning of each chapter to facilitate reading a particular section of the book. 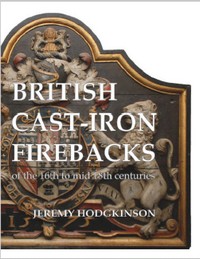 Firebacks began to be made in Britain in the first half of the sixteenth century. From the purely functional purpose of protecting the back of the fireplace and reflecting heat into the room, it was not long before the opportunity was taken to embellish their plain surfaces. Their decoration provides us with a reflection of the social history of the times in which they were made, whether in the heraldry of royalty and the landed class, the religious and political turmoil of the Stuart period, or the beginnings of the Enlightenment and the rediscovery of classical literature.
Illustrated with more than 300 photographs, this first survey of British firebacks sets out to explore their development and variety, and to provide interpretation, where possible, of the decoration to be found on them. The illustrations are to scale so the relative sizes of firebacks can be compared, and there is a comprehensive gazetteer with full details of each fireback shown.
A searchable database of firebacks is available at  http://www.hodgers.com/firebacks 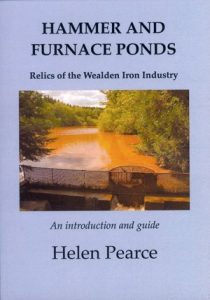 Back cover notes: They beautify the woodlands of the Kent and Sussex High Weald and adjacent parts of Surrey, but they were created to power what has been described as the country’s first industrial revolution.
Helen Pearce’s walker-friendly guide to the rich crop of surviving hammer and furnace ponds in the area traces the history of iron exploitation from pre-Roman times, but concentrates on the 16th and 17th centuries when the Weald throbbed to the sound of trip hammers.
The book includes:
A complete gazetteer of surviving ponds, with map references and access details
A list of museums with iron industry displays
A glossary of terms and ideas for further reading
There is more at the  website www.hammerpond.org.uk