The Wealden Iron Research Group (WIRG) was founded in 1968 to focus and initiate research into the extinct iron industry of the Sussex, Kent and Surrey Weald. In this website you can find out about its activities, discoveries and publications, and how to become a member. 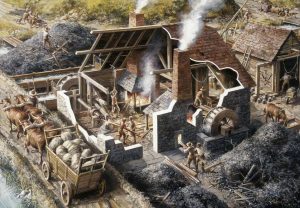 Read an outline of the iron industry that prospered in the Weald from the Middle Iron Age through into the Roman occupation. After a hiatus in the Saxon period it revived in the Middle Ages before new technology introduced from northern Europe caused the region to rise to prominence as the country’s main producer of iron during Tudor and early-Stuart times, remaining as a centre of cannon casting until the 1760s.

Discover what the Wealden Iron Research Group (WIRG) set out to accomplish when it was established more than 50 years ago, and how the range of interests of its members is reflected in the varied activities they undertake, from field archaeology and experimental ironmaking to meetings and visits.

On a number of occasions members have enjoyed extended visits to other iron-producing areas, both in Britain and on the continent, to learn about the similarities and differences in the technology and organisation of those areas compared with the Weald. The pages in this section contain images and descriptions relating to those visits.

From the outset WIRG has published the results of its fieldwork and the researches of its individual members in its Bulletin, Wealden Iron, issued annually. These are all available on-line as are its biannual newsletters. WIRG also has provided links to the texts of standard reference works on the iron industry that are no longer in print, as well as giving information about current books on the subject.

WIRG offers assistance and advice to anyone interested in researching the iron industry in the Weald, and members with specific research interests can be contacted. Normally unpublished, several theses on subjects directly  concerned with the industry in the region, that have been submitted for the award of higher degrees, have also been made available for download.

Over the years WIRG members have played an active part in many excavations that have taken place on Wealden iron sites. Published archaeological reports on these seldom include the people who were involved, nor do they include more than a few select images of the excavations themselves. The group is assembling an archive of photographs, both formal and informal, of those excavations, as well as of some other discoveries, and some historic images of sites not published elsewhere.

For more than 40 years members of WIRG have conducted experiments in the smelting of iron by the primitive bloomery process practised in the Weald from the Iron Age to the end of the Middle Ages. These experiments continue at a site on Ashdown Forest, and details can found about the different stages of these experiments as well information for prospective participants.

This section provides information about where there are examples of iron produced in the Weald, in museums and elsewhere, and of the types of products most often encountered. These include firebacks, graveslabs and cannon. Links are provided to external websites of the places mentioned.

HOW TO JOIN WIRG

WIRG is a registered charity and its business is conducted by a committee of Trustees elected annually. Here you can access an application form for membership, read the Group’s constitution and see current subscription rates.

From here you can access three searchable and interlinked databases. The Sites database contains details of over 1100 locations associated with the production of iron, including furnaces, forges and sources of iron ore; over 2300 people connected with the iron industry can be searched for in the People database; and the Bibliography lists nearly 700 articles and books, some of them unpublished, that relate, in most cases directly, with the iron industry in the Weald.