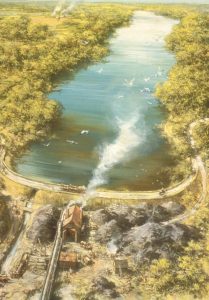 It is hard to picture the former iron industry in today’s countryside of small fields, woodlands and steep, narrow, gill valleys. But in this landscape exist all the necessary raw materials that allowed iron to be smelted for over 2,000 years.

The Wealden geology of sands and clays yielded the iron ore, as well as the stone and brick to build the furnaces; the woodland provided the charcoal fuel; and the numerous small streams and valleys ensured water power for the bellows and hammers of the forges and furnaces.

For two periods – in the first two centuries of the Roman occupation, and during Tudor and early-Stuart times – the Weald was the main iron-producing region in Britain. Julius Caesar first drew attention to iron being produced in the coastal parts of Britain. Archaeologists have found evidence of iron working from the late Iron Age at sites near Crowhurst and Sedlescombe in the south-eastern High Weald.

When the Romans invaded in AD 43, they found a well-established local tradition of iron making, using small, clay bloomery furnaces. With growing markets generated by the building of towns, villas and farms, the Romans encouraged this native industry. Sites from the period have been found all over the eastern part of the High Weald.

The ‘Classis Britannica’, or British Fleet, an imperial supply organization as well as a navy, took a strategic role in iron production. It managed several large smelting sites in the area around Hastings, such as one at Beauport Park, near Battle. This may have produced as much as 30,000 tonnes of iron over 130 years, and a substantial bathhouse was built there for some of the workforce.

We know little about iron making in the Weald in Saxon times, and the industry receives only one

mention in the Domesday Book for Sussex, at a location near East Grinstead. However, during the Middle Ages iron production grew steadily, concentrated more in the northern part of the Weald. Accounts have survived from 14th-century works at Tudeley in Kent, and excavations have confirmed medieval references to iron makers in Crawley and near Horsham. Towards the end of the period, water-power began to be used for forging iron, heralding the introduction, in 1496, of the blast furnace.

Introduced from northern France, and operated by skilled, immigrant workers, the blast furnace was a much larger, and more permanent structure than the bloomery; and instead of a few kilos of iron being made, daily output was nearer a tonne.

More ore and charcoal were required, and the need to operate the bellows by waterpower, instead of by hand, meant that ponds had to be created to store the water. In addition, the higher temperatures in the furnace meant that a different type of iron was being produced. A second process “the forge”, with its own pond and supply of charcoal – was needed to refine the iron.

By the mid-16th century there were 50 furnaces and forges, and that number had doubled 25 years later. All over the Weald, the iron industry was having an effect, with large numbers of people employed in digging ore, cutting wood and transporting both raw materials and products.

Most furnaces made ingots of iron called ‘sows’ for refining into wrought iron, but from the 1540s a small number began to make cast-iron cannon, a product that grew to be a profitable, and sometimes illegal, export. Improvements in house design led to the building of chimneys, and the need for iron fire-backs to protect the brickwork. Many Wealden farmhouses contain examples of these decorative and functional plates. In several Wealden churches there are examples of iron memorials. The oldest is in Burwash, dating from the 1530s, while Wadhurst church has over 30, dating from the early-17th to the late-18th centuries.

As competition from imported iron increased, the Wealden ironmasters began to concentrate increasingly on gun founding, and examples can be found all over the world, wherever Britain fought or traded. Eventually, the onset of the Industrial Revolution took heavy industry north to the coalfields, and the last furnace in the Weald, at Ashburnham, closed in 1813.

So, where are the remains of iron production? Building stone was too valuable in the Weald to be left unused, so the works were dismantled, and the woods grew back over the former sites. Only the tell-tale waste, called slag, from the smelting process, and some of the hammer and furnace ponds are left to remind us of a once-great Wealden industry.